Playing The Part: Reagan, Trump, And The American Presidency 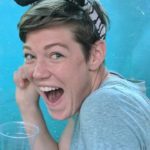 If you have a pulse you have probably, like me, wondered how we actually got here. Even though I’ve said it a million times internally and maybe called my mom and asked, “no seriously, what the hell…” it’s important that we try and verbalize it. We have to try and find an answer. Here’s the thing friends, this doesn’t happen in a vacuum. Quite the contrary. A lot has to happen for us to be faced with this sort of election. As horrifying as it’s been, we know enough to know where it comes from.

Let me preface with this: I run the risk of really oversimplifying some amazing work by some amazing political scientists. I took one class on the presidency in my undergrad (which makes me an expert, right? That’s how the Internet works now?) and, truth be told, I didn’t really want to take it. But I was part of the Bill Newmann fan club at VCU and I figured it would round me out with my classes on the Congress and courts and politics. I only started to grasp the full scope of the office at that point.

It’s really easy to think of presidents as really singular, idiosyncratic individuals. Despite their party affiliations, which are hammered into our head, we often try to categorize presidents by their terms alone and fail to see the larger picture. We’ve seen this cycle play out before, though. We like our presidents to look and act a certain way, even when we swore up and down that we were sick of it.

One of the ways that we continue to see the office of the presidency is in terms of “premodern” and “modern.” This title of “modern” presidency, despite how it sounds, does not refer to the current GOP nominee firing off inflammatory tweets at 3AM. Instead, it refers to a change in the expectation of office and the reach of the president.

Premodern presidents were recognized for their previous public service. They were held in high esteem by their peers because of their contributions to government, even if they had not held political office before. The modern presidency, on the other hand, has the added component of crisis management, and emerged in — you guessed it — F.D.R.’s presidency. No longer is it enough to be a dedicated public servant. We now look to the office as an embodiment of hope, a sort of shepherd in scary times.

We’re past the modern presidency though, and some have theorized that we have entered into what’s known as the “plebiscitary presidency,” or “imperial presidency,” in which the office itself is so large that a president generally does not go through Congress to accomplish their goals. They are really only accountable during times of election or impeachment, and it is characterized by the public’s dismay at the political system and political failure. When we’re happy with them, we let them exercise a lot of power without checking it. When we feel wronged by them, we decided to curb that power and replace them with someone we perceive as less of an “over-reacher.” When we feel they’ve been inadequate, we look to someone strong to take the reins again. We, as Americans, are pretty preoccupied with shortcomings in this office.

Sound familiar? Much of our fuel for who we elect has to do with how we feel about the previous tenant of the White House. Nothing new there. But what we do with that feeling is important.

Take, for example, the crisis of faith the public felt over the office of the Presidency after the untrustworthiness of Nixon and the apparent “failure” of Carter. These men did not embody the the prestige of the office. Watergate shook the nation’s faith in the office to the core, and poor Jimmy couldn’t catch a break. His infamous “crisis of confidence” was the exact opposite of what folks wanted and needed to hear at the time, no matter how legitimate it was. Because, whoa bud, we did not elect you to remind us what was wrong with the world, we did not ask you to ask us to toughen up and make hard choices. We asked you to fix it.

Enter Ronald Reagan! Reagan restored the prestige. He comforted the public. Where Carter wore a sweater, Reagan wore a tux! I don’t know if a picture of Reagan exists without an American flag somewhere in the background be cause thought of those things. Guys, he was an actor. He was a political “outsider,” who told the public about how the problem with today was the government itself.

Isn’t our choice really not one of left or right, but of up or down? Downtown the welfare state to statism…to more government authority, less individual liberty, and ultimately, totalitarianism?

In response to the recession of 1981–2, Reagan blamed the current political actors by calling their actions “extravagant” and crediting them with the high unemployment rate and inflation. Reagan came in with a positive spin, putting the worries of Americans to rest by insisting that Carter’s calls for the individual sacrifice for the collective good of the nation were unnecessary. Finally, an outsider, a guy who thinks like me!

Is it at all surprising that we’ve gone back to this mold? Look at Trump. Is he not an actor? Look at his hit reality television show, “The Apprentice,” in which he commands a boardroom by dramatically “firing” people and running what seems to be a tight ship.

Look at his rhetoric. In the two presidential debates we’ve seen thus far he has critiqued Clinton on her lack of action over the past “thirty years.” Despite her extensive resume of public service she’s been painted as the same old politician, where Trump is an outsider, a man with a plan, who warns against the danger of government interference at the risk of descending into chaos. The jobs are going away! The illegals are coming in! Politicians are bad and I am not one of them! But I can fix it.

In some ways, this was cyclical and bound to happen. The public was exhausted after George W. Bush’s presidency and wanted to put distance between themselves and the War in Iraq. Though Obama was elected in 2008, which gave Democrats a partisan lead over the Republican Party, ideology did not shift to the left. In fact, it shifted right. Obama acknowledged the slimness of his victory and noted that in, in order to be effective, we had to work together and understand that “wisdom was not the monopoly of any one party.” Obama embodied hope for change, for bi-partisanship, and and accountability to the public and other branches of government.

At the sunset of the Obama presidency, the public opinion has again swing like a pendulum in the opposite direction. A man who possesses the opposite qualities of the leader the public has grown tired of has risen to power. He is not the “ivy-tower” liberal. He is not politically experienced and has little interest in working with the other side of the aisle, or other countries, for that matter. He has swooped in and promised to restore order. He has given the public what they wanted, which is a facade of a man who can restore the office of the presidency as one of action. He’s an actor who can cater to the desires of those who lean right.

The difference between this time and last time, with Reagan, is whether Americans want to stick around to see how this movie plays out. The stakes are higher this time. Instead of simply accusing our government of being ineffective, our main actor has spewed hateful messages of large parts of the American population: people of color, Muslims, women, just to name a few. So while someone with lofty promises who knows how to woo a crowd seems appealing, as it has in the past, we don’t have to uphold the cycle. We have the option of buying into an act or electing someone with an actual resume this November 8th. Please take the time to do your part.